Your Pacemaker device contains either a 60GB or 120GB hard-drive. This holds all the music on your device. Hard drives last on average between 5-10 years and unfortunately because the Pacemaker is portable, and hard drives are sensitive, if you’ve dropped your device or given it a few knocks on occasions – chances are it’ll be the first thing to break. Don’t despair! You can replace it – you just need to be comfortable with a screwdriver.

Things you will need:

Where can I order these things?:

The screwdriver is a hexagonal bit, specifically Torx T5. These are really cheap to buy – look for a set like: “Screwdriver Torx T5 T6 T8 T10 T15 Bit PH Tool Set for Mobile Phone” It’ll contain all the bits you need, including a Torx T7 and T4 for other parts of the Pacemaker not in this repair.

The hard-drives originally used in the Pacemaker are no longer manufactured, but the good news is the hard drives use a standard 1.8″ PATA ZIF connector. A better option is to purchase a Solid State Disk or SSD these days. The key advantage is they have no moving parts and therefore are not susceptible to shock if you drop your Pacemaker in the future. They won’t break basically – and everyone likes indestructible things! An example model can be found here: “1.8″ PATA ZIF”

Place your Pacemaker device on a flat surface and unscrew the 8 screws on the back. 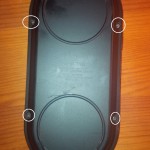 Lift off the backplate by pulling it straight upwards.
Do not attempt to pull it off at an angle as there are two boards for the power buttons and audio jacks which will be left in the backplate as you pull it upwards. 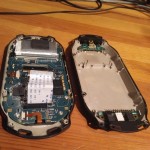 WARNING – BE CAREFUL AS IT IS EASY TO BREAK THE ZIF RIBBON CABLE!

The hard drive (not shown in the picture above) is contained in rubber mounts which absorb knocks and vibrations. At the end closest to the bottom of the device is a small ribbon cable which connects the hard drive to the logic board within the device. You can see the white example in the picture though above. Carefully fold out the HDD downwards, so you can access the small black locking device on the ZIF connection. You must lift this with your fingernail and gently pull the ribbon cable out to allow you to safely remove the HDD.

Replace the rubber protectors on the SSD and put it back how it was (little knobbly bits facing down, onto the mainboard).

Replace the backing, ensuring that the 2 connections (the buttons/USB on the top and the POWER/AUDIO) are made cleanly, and the ribbon does not get in the way of the pins and sockets as you close the device.

Screw it all together and switch on the PMD. It will ask you to restore the hard drive. It will reboot and ask for a firmware update, so update the firmware using the instructions found on this website and you’re ready to mix again!